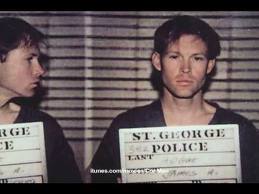 “You ever come across anything like time travel?” – Uncle Rico, Napoleon Dynamite

James Arthur Hogue, now 51, was possibly the first high-profile fake teen. Unlike the “serial teens” we’ll meet later in this series, his reasons for impersonating a high-schooler weren’t terribly complex: He wanted a second shot at athletic glory, and he felt entitled to grab it by any means necessary. He became a career criminal… with an Ivy-League education.

In the mid-’70s, Hogue set national records as a runner with the cross country team at Washington High in Kansas City, Kansas. But at the University of Wyoming, he unexpectedly choked. His performance was so lackluster that after just one meet, he left the team. Before finishing his sophomore year, he dropped out of school and returned to Kansas City. He never competed under his own name again.

After brief stints at a community college and the University of Texas at Austin, Hogue turned to petty thievery. It isn’t known if this was a habit he picked up in earlier years, but conning and stealing quickly became his way of life. In 1983, at the age of 24, he was convicted of theft and sentenced to three years of parole. He violated it freely, drifting first to Colorado and then California.

In September 1985, a wiry 16-year-old boy enrolled at Palo Alto High as a senior. He had a lean, impish face and super-straight brown hair chopped in an awkward bowl cut. Jay Mitchell Huntsman explained to school officials that he was a Swedish-born orphan. After his parents died in Bolivia, he was raised by friends on a commune near Elko, Nevada. Though he had been barely been homeschooled, he seemed to be of average intelligence.
The mysterious Swede told his classmates he would earn a track scholarship to Stanford, and he wasn’t screwing around. Just one month after starting high school, he won the Stanford Invitational Cross Country Meet.
Jason Cole, a reporter for the Peninsula Times-Tribune, was intrigued by the so-called Mystery Boy of Palo Alto High, and suspicious of his colourful background. He began researching the orphan’s history. It didn’t take him long to learn that no commune existed in or around Elko, Nevada. Palo Alto police discovered that the “orphan” was a 25-year-old Kansas native with a police record, who had stolen the identity of a baby boy deceased at birth. Weirdly, they didn’t charge him with any crime.

Hogue “dropped out” of Palo Alto, of course, but remained in the area. The following May, he was nabbed for forging checks and sentenced to 90 days in jail. Upon his release he promptly broke parole and made his way to Colorado and posed as a bioengineer with a doctorate from Stanford. The phantom credentials didn’t get him far, though; he ended up as a running instructor at the Cross Training Clinic in Vail. He worked there until the early summer of ’87, when a co-worker exposed him as a fraud, then drifted back to California and attached himself to custom bike-builder Dave Tesch in San Marcos. He lived in Tesch’s home and helped him with his bikes until October. That’s when his criminal tendencies overwhelmed his common sense again. He swiped a cache of pricey bike parts from Tesch’s workshop and fled to Utah.

That November, Princeton University received a most unusual application from a young man in St. George, Utah. 18-year-old Alexi Indris-Santana was a ranch hand at the Lazy T Ranch. Mostly self-educated, he had scored 1450 on his SATs and seemed like an all-around upstanding citizen. He excelled in sports, particularly running, and read the classics. His mother, a sculptress, lived in Switzerland. His references included the owner of the Lazy T.
In March 1988, this remarkable cowpoke traveled to New Jersey and toured the famous Ivy League campus. He told track coach Bill Ellis that if accepted, he would love to join the team.

Indris-Santana was offered a scholarship to Princeton, but James Hogue wasn’t so lucky. He was arrested for stealing bike parts. Police were disturbed to find high-school track trophies and fake applications to Ivy League schools among his possessions. Hogue pled guilty to theft, receiving a 6-month prison sentence. That put a serious crimp in Indris-Santana’s college plans. Hogue had little choice but to ask Princeton for a one-year deferment. His mother the sculptress was dying of leukemia, he explained, and he had to travel to Switzerland to be by her side. Princeton granted the deferment.

In June 1989, Hogue once again broke parole. He went to Princeton and became Alexi Indris-Santana, orphan ranch hand. Throughout the summer he worked on a grounds crew and attended orientation courses, gaining his footing on alien territory. Now 28 years old, he hadn’t been in a classroom since his “expulsion” from Palo Alto High 4 years earlier.
Just before the school year began, the Trenton Times profiled Alexi in a story titled “A Different Path to Glory”. When classmates asked about his famous background, he told stories of riding through the Mojave Desert on a horse called Good Enough. He certainly looked the part: He still had the bowl-cut hair, the ropy physique. No one would have mistaken him for a child of privilege. If he sometimes reverted to prison slang or spoke of things that the average 19-year-old wouldn’t know about, nobody noticed.

For the next two years, Indris-Santana was a solid performer both in the classroom and on the track. Whatever had stymied him at the University of Wyoming years earlier was no impediment at Princeton, alma mater of Alan Turing and Richard Feynman. He was even admitted to the university’s oldest, boys-only eating club, the Ivy. He hung out with other runners and had a girlfriend, a student from a well-off family.

His freshman and sophomore years passed without a hitch. Utah authorities had no idea where he was, and thanks to scholarship money he wasn’t stealing (or at least wasn’t stealing often enough to get caught). Then, in February 1991, someone recognized “Alexi” at a Princeton-Harvard-Yale track meet in New Haven, Connecticut. Yale senior Renee Pacheco later said she would have recognized that bowl haircut anywhere; it belonged to a former classmate at Palo Alto High, the “boy” known as Jay Huntsman. She knew he was really James Hogue.
Pacheco phoned Palo Alto’s track coach, Paul Jones, to tell him of her sighting. Jones alerted Peninsula Times-Tribune reporter Jason Cole, the man who had pegged “Jay Huntsman” as too good to be true.

Within two days, the details of Alexi’s true identity were in the hands of Princeton officials and police. There was no Lazy T Ranch in Utah. Hogues‘ mother was alive and well in Kansas.
James Hogue was arrested in a Princeton geology lab and charged with forgery, falsifying records, and wrongful impersonation. He initially pled not guilty, and somehow managed to post his own bail. One year later, however, he faced the futility of fighting the massive evidence against him and accepted a plea deal; 3 years in jail, 5 years probation, and 100 hours of community service. Not a bad rap for defrauding Princeton of over $20,000.

Two Places At Once

Hogue appealed his sentence. He did this from Massachusetts, because he had enrolled in an extension program at Harvard. Really. Crazy as it seems, the court had granted him permission to continue his studies, and Harvard accepted him on the strength of his Princeton grades. He got a job as a cataloguer at the Harvard Mineralogical Museum and rented an apartment in Somerville.
In December 1992, New Jersey authorities ordered Hogue to finish out his prison sentence. The following May, Harvard museum curators realized that $50,000 worth of gemstones were missing. Bizarrely, though Hogue had supposedly been locked up in the Mercer County Correctional Center in Hopewell Township, New Jersey, from December ’92 to early May ’93, he had somehow managed to appear for work at the mineralogical museum several times in February and March. Sgt. Samuel Gordon insisted he couldn’t have slipped away to Massachusetts. This mystery was never adequately solved, it seems.
The gems, along with a microscope and other lab equipment stolen from Harvard, were found in Hogue’s apartment. More jail time for larceny, then for parole violation. He ended up spending more time behind bars than he had in the classroom.

Is this the end of Hogue’s story? Of course not. In 1996, Hogue was arrested on the Princeton campus for trespassing, trying to pass himself off as a grad student.
Now his story runs almost in reverse. In 1997, he returned to Colorado, adopted the name James Haag, and stole a bicycle in Aspen. He was charged with resisting arrest. In 1998 he received community service for swiping food and Rogaine from an Aspen supermarket. An employee at the Aspen Daily News filed a restraining order against him for trashing her car and harassing her with phone calls. He was arrested for theft again in 2000.

In 1999, one of Hogue’s Palo Alto classmates began making a movie about him. Naturally, Jesse Moss had never forgotten the “new kid” from Nevada who was exposed as a twentysomething thief just one month into the first semester of his senior year. He tracked his subject to Colorado, where Hogue was living his usual rootless existence, drifting from town to town doing construction work and occasionally being arrested for theft. He had no real insight into his own behaviour, other than viewing it as a sort of hopeless addiction for which no cure has been found. He ultimately settled on a ranch in the southern part of the state, bringing at least one small part of his fantasy life into reality by legal means.
Moss’ Con Man was released in 2001.

In 2006, a police raid on Hogue’s house in San Bernardo, Colorado uncovered $100,000 worth of goods he had stolen from Telluride and Mountain Village homes, probably over a period of several years. A month later, U.S. Marshals tracked him to Tuscon, Arizona. He struck another deal, pleading guilty to one count of felony theft in exchange for the dropping of other charges. He was sentenced to 10 years in prison. In phone calls to his nephew, he suggested that someone tell his Russian fiancee he was killed in a car crash.