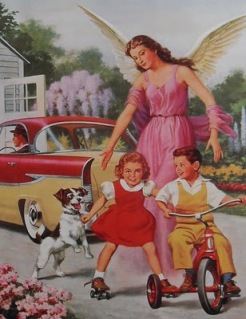 Check out the update at the end of this post.

No one wants to debunk an inspiring, heartwarming, faith-affirming “angel” story. But somebody has to be the grownup around here.

Last Sunday morning, there was a serious two-car crash on Highway 19 near Center, Missouri. Aaron Smith, 26, struck Katie Lentz, a 19-year-old on her way to church, head-on. Lentz was pinned against the steering wheel of her totaled car with a broken femur and other injuries, unable to move. After nearly an hour of unsuccessful rescue efforts, Lentz asked the rescue crew to pray with her. They obliged.
That’s when the mystery priest materialized. “He came up and approached the patient, and offered a prayer,” New London Fire Chief Raymond Reed told KHQA-TV. “It was a Catholic priest who had anointing oil with him. A sense of calmness came over her, and it did us as well.” The priest prayed that the tools being used on the car would work so that Lentz could be removed.
Moments later, the  Hannibal Fire Department arrived.
After the jaws of life were used and Lentz was extracted, people began to wonder if the priest was an angel. He came out of nowhere, vanished without a trace, and doesn’t seem to be attached to any of the area’s Catholic churches. He also doesn’t appear in any photos taken at the scene. The story has appeared in USA Today, the New York Daily News, and the Washington Times, and is now blowing up the Internet, with many people feeling that the mystery priest was either a kindly good Samaritan who is too humble to make himself known, or an honest-to-goodness angel whose prayer facilitated a miraculous rescue.

“They were Asian. I think they were speaking…Asian.”

It’s a beautiful story, but on closer inspection it’s just plain weird. For one thing, an officer who was at the scene claims he had a little chit-chat with the priest.
“My first thought was that it would possibly send the wrong message to Katie that maybe we had called a priest and thought she wasn’t going to make it. So I went back and talked to the priest and told him we were worried she would think we’d given up hope. He said, ‘I just want to anoint her,’ and so we just let him come up to the scene,” Ralls County Sheriff’s Deputy Richard Adair told WTKR-TV.

Secondly, the priest’s prayer didn’t even work. He prayed that the inefficient cutting tools the rescue workers were using would suddenly start working properly. They didn’t. Lentz was rescued because the fire department – which was already en route when the praying began – reached the scene with the right tools for the job. This would have happened with or without prayer.

Thirdly, and most significantly, we have some extremely conflicting descriptions of what the mystery priest looked like. A composite sketch shows a balding man in his ’40s, with a narrow nose. Another witness saw a priest who looked like Walter Matthau.
Adair insists the man he saw is “not even remotely close” to the composite sketch. Adair thinks he was 60 to 65, about 5’6″, with an olive complexion and a “very strong” accent.
No one has said the priest was elderly, yet commentators have speculated that the spirit of the controversial saint Padre Pio, who was 81 when he died in 1968, might have visited the scene of the crash in spirit.

This is not the first time “angels” have looked different to every witness. In the Cokeville Elementary hostage crisis of 1986, several children reported seeing angels in the classroom where a deranged gunman and his wife were holding authorities at bay with explosives while making outrageous demands. Several of the children claimed to have seen a “beautiful lady” who herded them toward the windows. Sisters Rachel and Katie Walker saw beings that glowed like light bulbs hovering above the heads of the other hostages. Nathan Hartley said the angel looked like his great grandmother.
The thing is, if you’re going to believe in angels just because a group of schoolchildren saw them, then you’d better start believing in aliens, too. In 1994, 60 students at the Ariel School in Ruwa, Zimbabwe claimed to have seen an alien emerge from a landed craft in the schoolyard. Unlike the Cokeville children, these kids gave consistent physical descriptions of a bald little man with huge black eyes (with the exception of one little girl who saw long, lustrous hair on the creature).
What? You still don’t believe in aliens? Then why don’t you go back to wanking to Cosmos, you black-hearted materialist bastard?

Yes, I’m being silly, but there’s a point here: You are not obligated to believe in angels (or aliens) on the say-so of traumatized people who may be suffering crisis hallucinations, or misinterpreting the actions of a kindly stranger, or even just flat-out lying.
There are those who would argue that God’s messengers appear to each of us differently, coming to us in the form that is most familiar and comforting to us. In that case, I fully expect my guardian angel to be a taco that poops ice cream.

UPDATE: The mystery priest has been identified. He is a local priest, Father Patrick Dowling. He has gray hair, resembles the composite sketch far more than Walter Matthau, and was en route to Mass when he stopped at the crash site. Now can we stop this angel/ghost business?

15 thoughts on “Miracle in Missouri”