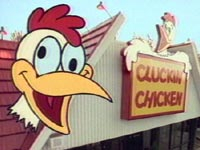 Now that the heartbreaking/enraging viral story about a disfigured 3-year-old being turfed from a KFC for “scaring the other customers” has turned out to be a likely sham, let’s review some of the other kooky hoaxes and urban myths involving fast food chicken joints…

Beginning in the late ’90s, scare emails claimed that Kentucky Fried Chicken was forced to change its name to KFC, because it was no longer selling actual chicken. It was farming genetically modified chickens with more than two legs, or chicken clones, or beakless, legless chickenblobs that had liquid nutrients transfused directly into their veins. The story was sometimes accompanied by this picture:

Needless to say, there wasn’t much truth to any of this.

Silly as the chickenblob legends are, factory farmed chickens can live in some pretty dismal conditions. A less-silly rumour, included in Super Size Me, is that chickens are being bred to have enormous breasts that make them so top-heavy they are barely able to walk. The ASPCA website even asserts that most chickens have to lie flat on the ground throughout their lives.

There is some truth to this one. In general, chickens bred for meat have disproportionately large chests and low bone density. Many of them have trouble supporting their own weight on those skinny legs.  I don’t know that the average broiler chicken has this problem, but it is a concern. In overcrowded poultry operations, birds can’t walk around, anyway, because they’re squished together like foam packing peanuts. 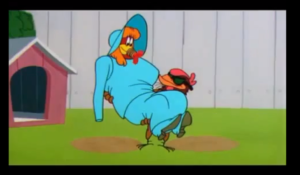 This is a golden oldie of an urban legend that I’ve been hearing my entire life. It seems to date from the mid-’70s. There are variations of it, but the most popular one is that a woman was nibbling a piece of Kentucky Fried Chicken when she suddenly realized it was actually a fried rat. In some versions of the tale, she died from a heart attack and her family sued the franchise. According to snopes, this story has never been traced to a single source, and it’s rarely connected to a specific location. It is incredibly unlikely that it really happened.

However, people now frequently share Guess What I Found in My Chicken photos and stories. In 2000, Katherine Ortega of Newport News, Virginia, produced a deep-fried rooster head that she claimed to have discovered in a box of McDonald’s chicken wings (which were being test-marketed in the area at the time). She threatened to sue, but apparently never did. It was not confirmed that the head came from McDonald’s.
In 2003, Baltimore pastor Tony Hill claimed he was served a mouse at a Popeye’s chicken outlet. He, too, never pursued the matter.
Last year, a Colchester man complained of finding a “brain” in his KFC meal. He chucked it in the trash, but KFC tentatively identified the object in his photo as a kidney. Two identical discoveries also received press attention.
Just this week, a woman in New Castle, England, released a photo of a piece of KFC chicken that was actually a battered and deepfried paper towel.

In 1986, folklorist Patricia Turner was teaching an Introduction to Black Literature course at the University of Massachusetts. For some reason, she told her students the Kentucky Fried Rat story, and was intrigued when one of the students informed her that the Church’s Chicken chain was owned by the KKK, and was putting something in its food to chemically sterilize men – mostly black men, since Church’s Chicken franchises existed in predominantly black neighbourhoods.
A nearly identical KKK “stealth sterilization” rumour was attached to a new brand of cheap soda, Tropical Fantasy, in 1991, leading to a steep plunge in sales and a frantic PR campaign. Anonymous fliers posted in Harlem implicated the Tropical Fantasy, Top Pop, and Treat brand sodas as part of a genocide-by-beverage campaign. There were reports of attacks on delivery drivers by outraged youths.
Turner thoroughly investigated both stories and wrote about them in her 1993 book I Heard It Through the Grapevine. Though racist chicken joints were definitely a thing, she couldn’t find any KKK connection to either Church’s Chicken or the Brooklyn Bottling Corp. (which, ironically, employed a large percentage of minorities). Though there are chemicals believed to decrease fertility in men, there is no substance capable of permanently rendering a man sterile that could be introduced into food or liquid.

I covered this one several years ago at Leaving Alex Jonestown, when Natural News was twigging out over it. Yes, dimethylpolysiloxane, a type of silicone, is an ingredient in the coating of some chicken nuggets. It is added to many foods and drink mixes to prevent sticking, clumping, and foaming. It’s simply a synthetic version of silica, which occurs naturally in most grains, water, and meats because it’s one of the most common minerals on the planet. Like silica, dimethylpolysiloxane is perfectly safe to ingest. 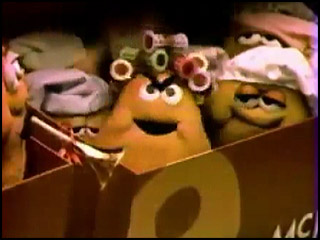 Forget the silicone…why does this McNugget Buddy have hair?!

1. Mechanically Separated Meat Is Bad for You

There is widespread suspicion that we are still living in Upton Sinclair’s Jungle, where hooves and a**holes end up in our processed meats on a regular basis.

In Super Size Me, Morgan Spurlock takes umbrage at the very idea of chicken nuggets. “What part of the chicken does a nugget come from?” he asks, wrinkling up his Mario ‘stache in a convincing simulacrum of disgust. In an article on nuggets published by NBC last year, a medical doctor is quoted as saying that chicken parts aren’t really chicken.
The notion behind chicken nuggets is exactly the same as meatloaf, liver pâté, or fishsticks, but for some reason, finely chopped chicken has become the new hot dog of the fast food world – always suspect, always derided, forever ghetto. It has to be the worst parts of the chicken that end up in Nuggetville, right?
Not really. The quality of the chicken is the same as you’ll find in other chicken products, since it comes from the same chickens. There is some skin in, say, McDonald’s nuggets – but most people eat the skin from roasted and fried chickens without a second thought.
Western consumers have developed a horror of mechanically separated meat (MSM), particularly after Jamie Oliver’s demonstration of how finely textured beef is processed went viral. In the aftermath of the “pink slime” revelations, certain facts were neglected:

This one really doesn’t have anything to do with chicken, but it’s too fun to ignore. In 1985, the Hanshin Tigers won the Japanese baseball championship with a 4-2 defeat against the Seibu Lions. Triumphant fans got carried away that night, stealing a Colonel Sanders statue and hurling it into the Dōtonbori River.
The Tigers didn’t win another championship. In the great tradition of sports curses, the vengeful spirit of the Colonel was blamed…though he didn’t actually die until 1990, and the Tigers had always sucked. Every so often, TV personalities would make a big show of trying to find the statue. but it wasn’t recovered until 2009.
The Tigers continue to suck.
The curse-KFC link has become so entrenched in Japanese culture that it pops up in the very first episode of the anime horror series When They Cry, which is set in 1984.

Now, get a little closer to your screen, because I’m going to reveal a few of the real dirty little secrets of fast food chicken franchises…

Harlan Sanders only served three months in the U.S. Army. He used the name “Colonel” just to sell chicken.

In the ’60s, the “Colonel” made cameo appearances in cheesy exploitation flicks like Hell’s Bloody Devils and Hershel Gordon Lewis’s Blast Off Girls, hawking his chicken.

In the ’70s, long after he had sold his franchise, the Colonel described Kentucky Fried Chicken gravy as “sludge”.

After a 2010 survey of  Americans ages 18-25 found that 52% of them believed Colonel Sanders was a fictional part of KFC’s branding, KFC launched an intensive PR campaign to prove Sanders had been a real person.