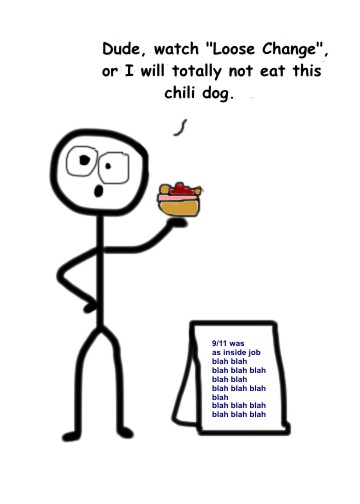 “The world’s first 9/11 hunger strike”: An empty stomach and an empty gesture?
It’s been nearly a week since Pheonix 9/11 Truther Blair Gadsby began his hunger strike in a bid to win an audience with John McCain. Gadsby has reportedly dropped 8 pounds from his already skinny frame, yet I still have no idea why a fast is considered an acceptable way to get attention for 9/11 Truth. Seems like a grueling way to get some love from a guy who can’t really do diddly-squat about your concerns, anyway. Hunger strikes are traditionally aimed at inducing guilt in people who bear responsibility for your plight and cando something about it. For instance, when Tibetan Buddhists go on hunger strikes, they’re asking for a nation’s religious and political freedom – not for, say, a movie date with China’s VP.
You see, Gadsby simply wants McCain to sit through a two-hour presentation of 9/11 Truth “facts”, followed by a debate between Truthers and non-Truthers. Tell me, how would this change one thing? Do Gadsby and his supporters honestly believe that McCain hasn’t heard this sh** before? Is this really anything more than a PR stunt? It strikes me as the equivalent of a 2-year-old holding his breath until dad agrees to take him to McDonald’s.
And speaking of McDonald’s, I am going to not eat a double cheeseburger out of sympathy for Gadbsy’s plight. I’m vegan, but still … it’s the thought that counts, right?

3 thoughts on “The Great Gadsby”