The media lookalikes conspiracy meme started by Ed Chiarini of WellAware1, which I’ve covered here and here, is getting out of control. I thought it was restricted to the fringiest fringe of conspiranoid kooksters, but the picture below has gone viral in a minor way among conspiracy folks, even ending up on Snopes along with other Sandy Hook-related weirdness. On one Facebook page alone, it has received well over 1500 likes, and roughly half the commenters seem to think the whole media lookalikes theory could have some validity (the other half are dumbfounded that anyone would fall for it). 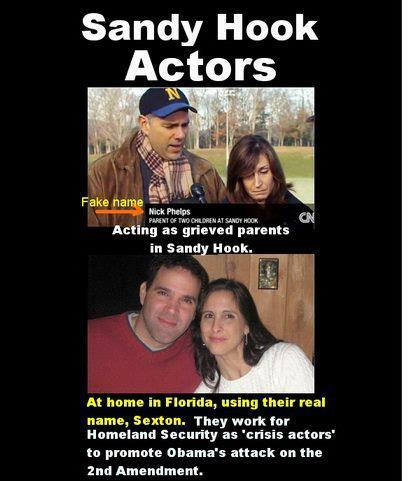 Yes, Nick and Laura Phelps are real people. Obviously. They live in Newtown, Connecticut. They have two children enrolled at Sandy Hook Elementary, and in news reports they have mentioned that they don’t know how to explain the shooting to them.
Seriously, people, why would the media need fake parents when there are dozens of real grieving parents in Connecticut right now? Who would risk putting fake parents on TV, knowing that teachers and other parents and neighbours will immediately blow the whistle on a pair of shameless hoaxers?
Ed Chiarini (AKA “Dallasgoldbug”) is suffering from the Fregoli delusion, or something very much like it. He thinks Winston Churchill and Lionel Barrymore were the same man, that Walt Disney was literally Hitler, that Freddy Mercury became John Stossel, and that Steve Carell is also Alice Cooper.
This is just absurd. It is the stupidest and least credible conspiracy meme I have ever encountered. Satanic bloodsucking lizardpeople from Mars make more sense than this.