Remember that time Joe Scarborough killed an intern and we all forgot about it?

Yeah, neither did I.

When Donald Trump started tweeting some very strange things about the co-host of MSNBC’s Morning Joe earlier this month, my response was the usual What the hell is he even talking about? It’s not the first time he has tried to humiliate Joe Scarborough and his co-host/wife, Mika Brzezinski, but this seemed positively unhinged.

So I looked into it, and learned that Trump was not the first notable person to make a thing out of this. Two prominent, influential men have tried to bring down Joe Scarborough for murder.

Back in 2001, when Scarborough was a Republican Congressman in Florida (1995-2001), an intern died inside his congressional office in Fort Walton Beach. Lori Klausitus was only 28 years old and appeared to be in perfect health, but she had cardiac arrhythmia, or abnormal heart rhythms. On the night of July 19, 2001, as she worked in the office, the cardiac arrhythmia stopped Klausutis’s heart and breathing. Unconscious, she dropped to the floor. Her head struck her desk on the way down. This blow to the head caused a hairline fracture in her skull, which contributed to her death as blood pooled at the point of fracture.

Her body was discovered on the morning of July 20, 2001, by a couple who entered the office to discuss a work permit. Foul play was quickly ruled out, as nothing at the scene indicated any violence towards Klausutis and autopsy findings were fully consistent with an unfortunate death.

It wasn’t a huge deal at the time. The Northwest Florida Daily News ran a few brief items on Klausutis’s death that summer. The national press gave it no attention, with the exception of a lone  paragraph in the Washington Post‘s “Nation in Brief” section.

Even in conspiranoia circles, there wasn’t much to see. Klausutis popped up on a “Bush Body Count” list that circulated on message boards in 2001. In 2002 the case was pursued more aggressively by the author(s) of an image-heavy website called All Hat No Cattle (which is, surprisingly, not defunct). They took it no further than pointing out that the medical examiner who ruled on Lori’s death, Dr. Michael Berkland, was dismissed and replaced by a man who may have made illegal campaign donations to Scarborough. Whether that’s true or not, Berkland was let go a full two years after the Klausutis autopsy and the reason cited was his failure to complete autopsy reports throughout 2001 and 2002. The guy is a complete disaster.

The “suspicious” aspects of Klausutis’s death were few and vague:

Also, and perhaps most significantly, the disappearance of D.C. intern Chandra Levy had been exploding all over the news since May. Levy’s body would be discovered in 2002 and it turned out that she had been the victim of a serial rapist, but shady behaviour on the part of her boss/lover, Democratic Congressman Gary Condit, led to widespread rumours that he had some involvement in her death.

Though politicians killing their mistresses is a trope we all love to see in thrillers (House of Cards) and conspiracy theories (Marilyn Monroe), it doesn’t actually happen very often. Oh, wait, no. Let me correct that. There isn’t a single substantiated instance of a sitting Congressman, Senator or Governor killing a mistress or former mistress in all of U.S. history.  It is literally something we made up.

Besides, Scarborough was between marriages at this time. He had divorced his first wife the previous year and was engaged to second wife Susan Waren (they married in October of 2001). You could have a girlfriend killed just to preserve an engagement and avoid an extremely minor scandal (“Divorced man has sex with someone! News at 11!”), but really? Who does that?

The speculation about Klausutis got some traction on TruthOut, the Democracy Underground forums and several lesser-known conspiracy sites, but didn’t attract any notable attention. Interest briefly spiked in the late summer of 2001, when Fort Walton Beach police refused to release records of their investigation.

As the months and years passed, nothing new emerged. No one had any dirt on Scarborough. No one reported sketchy behaviour.  He wasn’t seen lurking around dumpsters like Condit had been. There just wasn’t enough gas in the tank to keep the thing going in conspiracyland.

That changed in late 2003, when there was a very interesting development. Someone of prominence began hinting that Scarborough could have been guilty of a crime.

That person was Michael Moore.

Scarborough had long been critical of Moore, and the animosity between them escalated after the release of Bowling for Columbine.

In 2004, Scarborough interviewed the director of an incredibly damning documentary, Michael Moore Hates America, on his MSNBC show Scarborough Country. Of course, he took some shots of his own at Moore in his opening remarks. You can read the transcript here.

During a subsequent interview with radio broadcaster Lars Larson, who was upset with Moore for allegedly doxing him (resulting in death threats to his personal phone number), Scarborough hinted that he was also having troubles with Moore.

SCARBOROUGH: Well, you know what? I can’t even say on the air right now because there may be a legal issue involved. I can’t even tell you what he said to me in front of a couple different crowds. I started getting flooded with e-mails about a crime that he accused me of doing. And we’ll reveal that later on but certainly not on tonight’s show, because this is about you.

Sadly, the full transcript of this interview is no longer online. What I’ve posted here comes from an excerpt on a Democratic Underground thread.

During a talk he gave at a San Francisco college on October 20, 2004,  as part of his Slacker Uprising tour, Moore went into a side-rant about Scarborough and admitted that he had researched him online to find something – anything – dirty on him. He found Lori Klausutis.

After Moore discovered the story, he bought the domain name JoeScarboroughKilledHisIntern.com. He never used it.

Moore didn’t stop there. He told an NBC reporter that he wouldn’t appear on Scarborough Country because of the “suspicious” death of Lori Klausutis.

At some point, Moore and Scarborough kissed and made up and were able to discuss things like Flint’s water without spitting all over each other.

As the Klausutis speculation faded and people forgot about the Moore/Scarborough kerfuffle, everyone moved on to other bullshit. 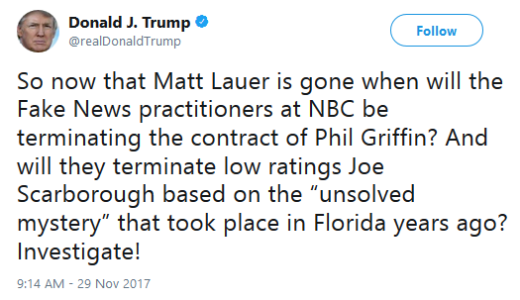 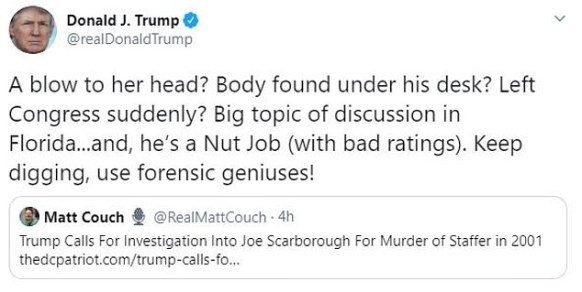 This is, to my knowledge, the first time an American president has hinted that a broadcaster could be a killer. And it appears to be an indirect response to Scarborough’s criticisms of Trump. Just as Michael’s Moore’s attempted smear campaign was a response to criticism.

Sporting the thinnest of skins, neither man gave a damn that in attacking Scarborough, they were also attacking the reputation of a young woman who did absolutely nothing wrong. Lori Klausutis was touched by no hint of scandal in her lifetime. She was a married woman known for her Catholic faith, dedicated political involvement and leadership skills. She was working toward a Master’s degree while interning, volunteering and serving as treasurer of the Young Republicans. She deserves so much more than a shitty domain name and a handful of grudge-tweets. 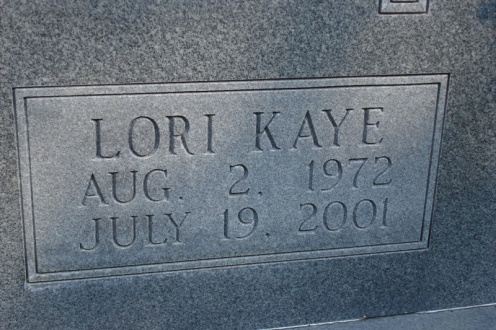