The Tyranny of Bringing Your Own Balls to the Tennis Court

Things were a little weird the last time we peeped in on the infowars scene. I hope somebody has checked on Alex Jones’s neighbours since then. Karen and Steve, if you’re reading this, just let us know you’re okay. 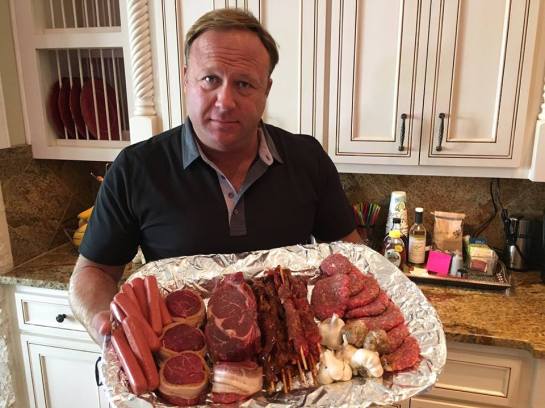 Today, the mood was more chill. Jones was talking about some things he seldom mentions, like the cultural landscape and the social perils of consumerism.

First, he went out of his way to justify his lifestyle, since John Oliver and others have called him out for owning at least three Rolex watches and so forth. He claims that at one Bilberberg meeting he picketed, he was confronted by an MI5 agent who demanded to know why he was staying at a three-star hotel if he was really a man of the people. He explained that he’s not against big corporations. He’s against globalist corporations.

This anecdote probably won’t convince anyone that Jones is some sort of working class hero masquerading as a Satanist in order to infiltrate the NWO. It has become increasingly obvious over the years that Jones is bougie as hell and plans to stay that way for as long as he possibly can.

He went on to complain that leftists are changing the cultural landscape of Austin, Texas. They will stop him while he’s shopping at Whole Foods to lecture him about having three children and driving a truck. Jones and leftists obviously do not get along, and that’s not a new thing. A decade ago, he was threatening to crush the skulls of hipster college students.

His Europe correspondent,  Dan Lyman, went on to say that Mexicans are also changing Austin culture. “The whole ethos has changed.”

This is practically a direct quote from Jones himself, who has been a bitter foe of Mexican culture for years. He claimed that the movie Machete was engineered to trigger a race war. Frequent Infowars guest Steve Quayle declared that H1N1 and its vaccine were “execution by injection”, a form of “esoteric murder, ritual Satanic deliverance of the innocents to death”, timed to occur with the “occult day, Cinco de Mayo”. Jones has complained that Mexican immigrants are “watering down the culture.”

Because Mexicans didn’t really have any influence on central Texas before these guys noticed it, right?

Jones cuts in on Lyman’s comment about Mexicans, and it’s unclear if he’s speaking about Mexicans or still going off about leftists at the grocery store: “They are the locusts that went to California and ruined it. Now they’re in Texas. They’re zombies!”

After a supplement-shilling break, Jones goes on to talk about gyms going bankrupt while big-box stores are allowed to stay open. Lyman complains that tennis players have been asked to bring their own racquets and balls to the courts. They both gripe about social distancing measures, such as the German cafe that humorously handed out pool noodle hats to ensure patio guests sat an appropriate distance away from one another. Jones bitches that staff at a steakhouse where he dined wore facemasks.

Jones declares this is all a giant Milgramesque experiment in humiliation and degradation, encouraging people to police each other and do ridiculous things to avoid infection.

This is what he does best: Turning insignificant colour news items and anecdotes into events of vast symbolic importance. Then he does what he does second-best, dismissing real news as fraudulent and of no genuine consequence.