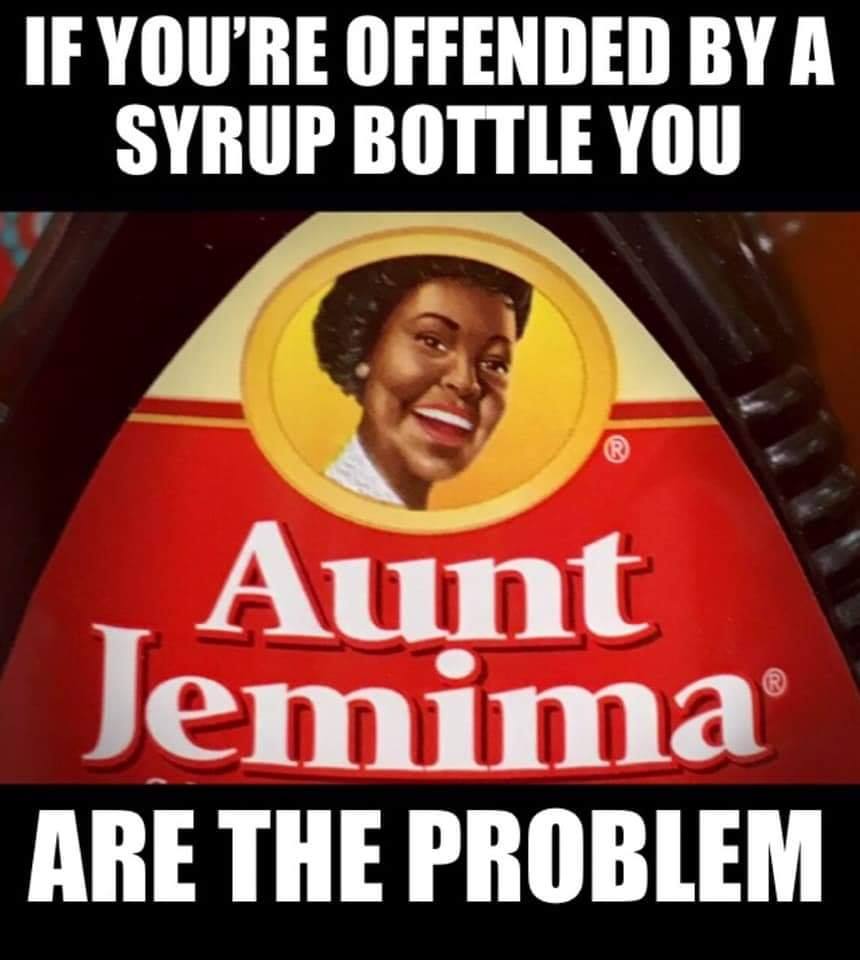 I’ve been seeing a lot of memes like the one above ever since Quaker Oats announced its decision to retire the Aunt Jemima character from its line of pancake mixes and syrups.

It didn’t take me long to realize that most of the people sharing these memes are not fully aware of the history of the product line and its marketing. “What’s wrong with a black woman on a syrup bottle? Maybe YOU’RE the racist,” is a common refrain on social media.

So here is an extremely brief history of why Aunt Jemima is, and always has been, a problem.

Beginning in the 1830s, there was an entire subsection of the American entertainment industry devoted exclusively to making fun of African-American slaves – how dumb they were, how funny they looked, etc.

The entertainers who created, wrote and performed these shows were white. The shows were performed for white audiences. The performers would smear their faces with black greasepaint and mimic people who had been held in slavery. Because it was funny to them.

Some of the most popular types of characters these white men played were:

In our age, the “mammy” stock character is perhaps most recognizable from Gone With the Wind (1938), in which a character known only as Mammy fusses over her white employer’s daughter. The actress/singer who portrayed Mammie, Hattie McDaniel, was not permitted to attend the Atlanta premiere of the film because she was black.

These white minstrel-show characters didn’t remain on the stage and screen. They were also used to market a wide array of products, and even restaurant chains. One of these chains was so overtly racist in its name and marketing that I am not even going to mention its name or post a picture of how its restaurants appeared throughout the ’30s, ’40s and ’50s. Here is a link to the Wikipedia article about it.

In the 1880s, two white flour mill owners began selling their “Aunt Jemima” pancake mix. They borrowed the name Aunt Jemima from an old minstrel-show song that began with the black soldier stereotype: “the monkey dressed in soldier clothes…” At the time, few Americans had any trouble with a “mammy”-themed product named after a racist song, and the marketing for Aunt Jemima products didn’t change much for decades. Four different actresses were hired to portray Aunt Jemima at expos over the years, and her image appeared in many colour advertisements that used faux African-American language.

The first woman to portray Aunt Jemima, Nancy Green, had been born a slave.

It wasn’t until the late 1960s that the company decided to update the “mammy” image a bit. They did this not by removing the mammy kerchief from the character’s head, but by making the character of Aunt Jemima a little slimmer, possibly to persuade customers that their product wasn’t fattening.

Aunt Jemima didn’t receive any further modifications until the late 1980s, a century after she was introduced. This time, the kerchief was removed and we saw just a smiling African-American woman who was not noticeably racist..unless you knew her history.

Because many Americans don’t know about the white minstrel shows, blackface, the Jim Crow laws and the history of slave imagery in marketing, they were baffled and upset by the idea of Quaker Oats pulling an old, well-known character from its products. What could possibly be racist about a smiling woman on a bottle of syrup?

When we don’t understand history, we can’t comprehend the present.