There’s a rumour snaking through Europe and the Net that German Chancellor Angela Merkel is the biological daughter of Adolf Hitler. This shouldn’t even be considered a possibility, as Merkel was born 9 years after the Fuhrer’s death, but the explanation is that the horrifically sadistic Auschwitz doctor Carl Clauberg was able to freeze some of Hitler’s sperm and inseminate Eva Braun’s younger sister, Gretl, with it years later.

If you’re not into global politics, you might remember Ms. Merkel from that incident in which President Bush rubbed her the wrong way, literally, at the 2006 G8 summit.

Eva and Gretl Braun (I can’t tell the difference, but this site assures us Gretl is on the left)

According to the rumours, Clauberg was “the father of artificial insemination”, but his Auschwitz experiments were actually aimed at forced sterilization of women. He only dabbled in insemination techniques. Robert Jay Lifton, in his 1986 book The Nazi Doctors: Medical Killing and the Psychology of Genocide , noted “Clauberg is reported to have told prisoners he planned artificial-insemination experiments, and there is one report of his admitting to two assistants that he had future plans for experiments in both natural and artificial insemination.” (272) There are no reports that Clauberg actually achieved any success with insemination; he is by no means the father of the procedure, which is derived from much older methods of animal husbandry.

Gretl Braun did have a daughter, Eva Barbara Fegelein, named after her Aunt Eva, but she was born on May 5, 1945, and committed suicide in 1975 – during the same period Merkel was studying physics at the University of Leipzig.

Predictably, this rumour has been incorporated into a baroque conspiracy theory about celebrities, Illuminati breeding experiments, and mind control. “Freeman”, producer/host of the anti-occult/conspiranoid Austin cable access TV show The Freeman Perspective, recently expounded on his theory during another Austin anti-occult/conspiratorial cable access show, Esoteric Science Roundtable (what is it with Austin?!):

Zsa Zsa Gabor’s eccentric husband, Prince Frederic von Anhalt, really is the father of Anna Nicole Smith’s daughter Dannielynn, as he insisted (DNA testing revealed Larry Birkhead to be the father, but never mind that; facts must never get in the way of a good conspiracy theory). Von Anhalt, like Merkel, was the result of Nazi experiments in breeding perfect Aryan specimens who could take over the world (clearly unsuccessful). Anna Nicole was a mind-controlled slave programmed through Satanic ritual abuse to have multiple personalities (he points to the infamous Mushroom Clown video as evidence that she had a little-girl alter personality). Lawyer/partner Howard Stern was her mind control handler. And Dannielynn is a Moonchild.

Prince Frederic von Anholt, born Hans Robert Lichtenberg around 1945 and “adopted” by Princess Marie Auguste of Anhalt in 1980. He was allegedly stripped and robbed by three women in California last year.

The Moonchild was a concept introduced in Aleister Crowley’s Book of the Law. It was described as something like an AntiChrist and/or an incarnate god, a child “resembling man, and possessing those qualities of man which distinguish him from beasts, namely intellect and power of speech, but neither begotten in the manner of human generation, nor inhabited by a human soul.” Rather than being conceived and born, the Moonchild would apparently be summoned through magick ritual.

In 1946, California rocket scientist/occultist Jack Parsons attempted to summon a Moonchild into the womb of his girlfriend with a complex set of rituals he called The Babalon Working. His assistant in this endeavor – I’m not kidding – was L. Ron Hubbard. The intended vessel/mother of the Moonchild, Marjorie Cameron, never manifested any signs of pregnancy, but to the end of her life she believed that she was the incarnation of Thelema’s Mother of Abominations, the Scarlet Woman of The Book of the Law. Parsons explained the lack of tangible results by saying the “birth” of the Moonchild was a purely metaphysical event, taking place on the ethereal plane. After Parsons’ untimely death, Marjorie Cameron performed a ritual to conceive a posthumous child with him a la Osiris and Isis, whom she christened Wormwood. This “child”, too, existed on the ethereal plane.

Freeman’s theory is, essentially, that genetically engineered Nazi Satanists are trying to take over the world by impregnating their mind-controlled robotic priestesses with AntiChrist Moonchildren.

Crowley’s Book of the Law described the Moonchild as “mightier than all the kings of the earth”. 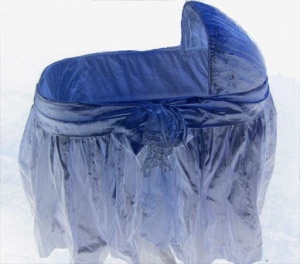