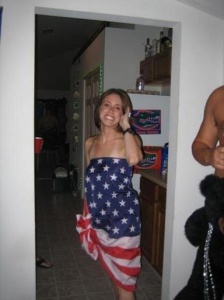 The year’s first Pants Afire Award goes to Casey Anthony, the mother of murdered 2-year-old Caylee Anthony, for telling the most (and most easily discovered) lies in the shortest amount of time.
I don’t usually pay attention to these high-profile missing child cases, because they’re only the tip of the iceberg. Every year, thousands of children go missing. Some are never found. Others, like Caylee, are found dead.
However, the Anthony case is worthy of mention because Casey Anthony – whether she’s guilty of harming her daughter or not – seems to be a whole new kind of stupid. I’m talking her-mother-should-have-kept-the-placenta-and-used-her-for-stem-cell-research stupid. I don’t mean that literally, of course. But Casey Anthony is stupid.

The following is gleaned from police interviews and a timeline of the Anthony case, available at the Investigation Discovery website.

On the afternoon of June 16, 2008, 22-year-old Casey left her parents’ house in Orlando, Florida, where she usually lived with her daughter, to go “to work” at Universal Studios. She planned to drop off Caylee at a nanny’s house. She told her parents she would be working late and spending the night at “the nanny’s house”, and would be home the following night. Later, over the phone, Casey told her mother a complex story about having to go to Tampa for a work event. While there, she said, the nanny had a car accident. Her injuries were supposedly being treated at Tampa General.

Casey didn’t return to her parents’ home for a month, at least not for long. In late June, she did sneak home long enough to borrow her mother’s truck and steal some gas from her father. She told her dad that Caylee was staying with the nanny, in Tampa.
This did not comfort Cindy Anthony at all; by July 3, she was so concerned about the lack of communication with Caylee that she posted this message on her MySpace page: “My Caylee is missing.” She suspected that Casey had been jealous of her closeness with the little girl, and took her away out of spite.

Casey’s car was found abandoned on June 30. The Anthonys learned about this on July 12. When the worried Anthonys finally located their daughter on July 15, Caylee was not with her. Cindy Anthony demanded to be taken to the little girl. At first Casey insisted that Caylee was safe in the care of her nanny, but she refused to take her mother to the nanny’s house even after Cindy threatened to call the police. Finally, after repeated confrontations with her older brother and Cindy, Casey revealed that Caylee was missing. The nanny had disappeared with her on June 9. Clearly, Casey couldn’t even remember when she left her parents’ home with Caylee for the last time, because the date she gave for Caylee’s supposed abduction was a full week before Caylee’s disappearance. This is the calibre of duuuuuh we’re dealing with, here.
Casey begged her mother not to report Caylee’s abduction to the police. Cindy, in one of the last smart moves she would make, did so anyway. Then the lies really began…

– Casey told Orange County detectives she was making every possible effort to find her daughter, though she had never even mentioned Caylee’s abduction to her boyfriend, friends, parents, or anyone else for a full month. She was not in Tampa at any time during that month. She had spent much of June and July living and partying with friends as though nothing was wrong, flashing a toothy grin while she posed for photos at nightclubs and get-togethers. She told detectives she hung out in bars to “get information” about her daughter’s abduction.
Casey also got a tattoo and bought lingerie while Caylee was missing, paying for them with checks stolen from a friend and money stolen from her mother. She seemed completely unaware that surveillance videos, receipts, photos, and eyewitnesses could reveal her activities.

Casey’s mother and father have also tried to make excuses for Casey’s partying. George Anthony said the photos were taken at least a year prior to Caylee’s disappearance, even though Casey’s current boyfriend (whom she met in early ’08) appears in some of the party photos. Cindy Anthony says the photos taken at Fusion nightclub were promotional photos for which Casey was paid. There is no evidence to support this. Friends of Casey told police she made numerous trips to nightclubs, bars, and parties between mid-June and mid-July, and that she drank heavily and enjoyed herself during these outings.

– She told Orange County detectives she was employed as an events planner at Universal Studios, with her own office. She was actually unemployed. She had been let go from Kodak, which had a contract with Universal, in 2006. Yet she went so far as to give detectives a bogus phone extension number, and named a fictional supervisor. She even agreed to lead detectives to her office. Partway down a hallway, she admitted she was no longer employed at Universal, but insisted she really wanted to check out Universal because it was one of the places Caylee had visited with her. Why would Caylee’s abductors take the child to Universal Studios? Casey had no explanation for her bizarre statement.

George Anthony had suspected for two years that his daughter wasn’t really working. The route she supposedly took to work every day wasn’t the easiest one.

– Casey said the only people who knew about Caylee’s disappearance were her former co-workers Jeff Hopkins and Juliette Lewis. She said Hopkins introduced her to Caylee’s nanny, Zenaida Gonzales. But Hopkins denied knowing the nanny, and made it clear that Casey mentioned nothing about a missing daughter when he bumped into her on July 2. There is no evidence that “Juliette Lewis” even exists.

– For two years Casey had been telling her parents, friends, and everyone else that she still worked at Universal. During May and early June she slept overnight at friends’ houses on several occasions, telling her parents she was staying late at work.

– She claimed she last saw her daughter on the morning of June 9, when she dropped her off at the babysitter’s home (apartment 210 at Sawgrass Apartments). The babysitter was Zenaida Fernandez-Gonzalez, a woman who also babysat for Jeff Hopkins. “Zanny” had also worked at Universal for a time, Casey said.
Casey obviously forgot that she had taken her daughter to visit numerous relatives on July 15, Father’s Day. Her parents had last seen Caylee on the morning of July 16.
A woman named Zenaida Gonzalez had checked out an apartment at the Sawgrass complex earlier in the summer and signed a guestbook that was visible to other visitors, but never lived there. 210 had been unoccupied and under renovation since February. The woman apparently has no connection to Casey, and says she has never worked as a babysitter. Nor did she ever work at Universal. It seems Casey didn’t have a nanny at all. She lifted a name at random from the guest register of a friend’s apartment complex, without making sure that person actually lived in the complex.

– When the Sawgrass story started to unravel, Casey supplied an entirely different one: Caylee had actually been abducted from a park by Zenaida and Zenaida’s sister. They gave Casey instructions on what she should tell the police if she wanted her daughter to remain safe, then drove away in an SUV.

– When first questioned on July 15, Casey said she had received a brief phone call from Caylee earlier in the day. The little girl happily talked about books and toys. Casey says she immediately dialed the number from which Caylee had called, only to find that the phone had already been disconnected.

It is now known that Caylee’s body had been in the woods since August, at the latest.
– She searched for “how to make chloroform” on her personal computer.

– She stole checks from the friend with whoms she was living, a credit card from her mother, and gas from her father.

– Casey abandoned her car (actually owned by her parents) in a conspicuous spot. The towtruck driver who removed it detected a corpse-like odour in the car, as did Casey’s mother, father, and brother when they reclaimed the car. The Anthonys feared their daughter or granddaughter had been killed and left in the trunk.
Casey said she ditched the car only because it ran out of gas.
On December 11, 2008, Caylee’s body was found half a mile from her grandparents’ home.
Casey Anthony had a month in which to craft a convincing explanation for her daughter’s disappearance. This was the best she could do.