He’s not called Bazooka Joe for nothin’, you know.

Thanks to “Jessy” for alerting me to this dire threat.

In his January 10, 2010 online newsletter, David Icke wrote about an “Attack from the Skies” that has been taking place in Ryde (a small city on the northern coast of the Isle of Wight) for the past two decades. It came to Icke’s attention over the holidays, when his friend Mike Lambert (described as a “healer and health and science researcher”, which in Ickespeak could translate roughly to “total crank”) took him on a tour of Ryde’s streets to reveal one of Their most insidious menaces to date: ABC gum.

There were so many flattened wads of gum (or, to be fair, a substance that looked exactly like gum) on the pavement that Icke was certain “this was not chewing gum by the sheer volume of it everywhere we walked…”
The wads seemed to follow the flight path of commercial jets, so Lambert suspects that those elusive chemtrails being sprayed throughout the UK consist of a gum-like substance that serves as “a carrier vehicle for viruses or poisons aimed at the population“. He’s been seeing it everywhere for the past 20 years. Ryde is apparently the Guernica of gum.
Lambert sent samples of the most recent gum to an unnamed lab, and preliminary results indiciated it could be “some kind of latex material…probably carrying a pesticide-type substance.” Despite the abundance of samples, Icke didn’t collect any of his own for testing.

The rest of the article is about the electromagnetic bombardment that They have been aiming at Icke, in an effort to give him cancer (according to a psychic, always a reliable source of medical advice). It seems They’re trying to prevent him from exposing the information in his latest book, even though it’s already on its way to press and Icke has already published, what, 500 books?
Icke concludes the gum portion of the article with a statement that should strike terror into the hearts of sane people everywhere:

“I have no doubt that, as the story of the Ryde ‘gum’ circulates, people will see the same in their own towns and cities. This is by no means confined to the Isle of Wight or even the United Kingdom.” 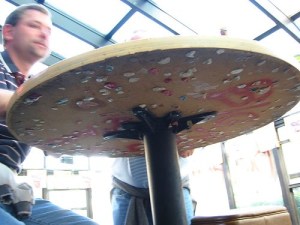